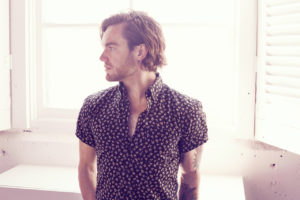 Before 2014, Aaron Pollock would have found it hard to believe that he would become the country music star he is today. Working full time in an office he suddenly couldn’t do it anymore. He left his job and decided to pursue his dream “to create music that impacts others the way music impacted him”. But Aaron’s love of music didn’t happen overnight.

Calgary born and raised, Aaron found a love for music at a young age. He gravitated to musical instruments and poetry writing and joined rock bands. His passion for songwriting and guitar skills seemed to be the perfect fit for country music. His choice genre turned out to be one of the best decisions he could have made. Today, he’s been described as being “an old-school storyteller with a modern flair”.

Q: Tell us about your upcoming track “I Don’t Drink Whiskey Anymore.” What was the motivation behind the song?

A: The story behind this song is actually super interesting. I co-wrote it with three of my best friends, and one of them went through a really painful divorce a few years back. About a year after, his ex called him up to recommend a new brand of whiskey that she thought he should try. In receiving this text, he realized that he hadn’t talked to her in a year and also hadn’t had a sip of whiskey since they broke up. This got the four of us (co-writers) talking and inspired us to write a song about bad habits. For some people, bad habits come in a bottle, and for others those habits are people that shouldn’t be in their life but are anyways. Breaking a bad habit is one of the hardest things in the world to do, but one of the most rewarding. I decided to give up drinking nearly three years ago, so needless to say I connected deeply with this song idea. I’m so proud of how it turned out, and to get to work with such amazing co-writers!

Q: You’ve had the chance to team up with Spencer Cheyne and Justin Kudding, two heavyweights in the country music industry. What’s it been like working with them and how have they helped shape your new music?

A: They’re so amazing at what they do. I started working with them at a point where I wasn’t a great singer, and where my style as an artist really wasn’t fleshed out at all. They were patient with me and played a huge part in helping me become the artist I am today. What’s really cool is that I approached those guys purely out of professional respect, and that relationship has since turned into an amazing friendship. I’m so lucky that those guys have stuck with me all of these years and am so grateful to learn from them and call them my friends.

Q: Sharing the stage with Brett Kissel, Jocelyn Alice, and Shawn Hook must have been an incredible experience for you. What were your takeaways from touring with them?

A:  Sharing the stage with those three was so special. To become successful at anything, I believe it’s important to find someone who can act as your mentor and show you how to get where you want to go. I’m constantly working on my ability as a performer, so to get to share the stage with three of Canada’s finest last year was a dream come true. They all approach performing in a completely different way. Where they’re all similar is off stage. They’re all genuinely kind, helpful people who took the time to help out a younger artist (me) they could have easily brushed off. The older I get, the more I realize that most of the successful people I know possess this attitude. It isn’t a coincidence.

Q: If you could tour with any artist in the near future, who would it be and why?

A: This changes all the time, but right now I’d have to say Morgan Wallen. He’s one of my absolute favourite artists right now and I’d love the chance to learn from him. Also, he looks like he’d be the most fun tour mate EVER.

Q: Having accomplished more than 500 songs and being recognized as Nashville Songwriters Association’s “One To Watch,” where does your motivation to write music come from? Who were your musical influences growing up?

A: Writing music is something I’ve had to do since I was a young child. I’ve been dealing with high levels of depression and anxiety for most of my life, and as a result I can get overwhelmed by emotions quite easily. Writing has always made me feel better, and I don’t know what I’d do without it. I grew up obsessed with classic rock. My bedroom was covered with Aerosmith, Guns N’ Roses, and Van Halen posters in my teenage years.

Q: They say you put your heart on your sleeve when you write your music. Out of all your songs which one resonates the most with you and why?

A: Right now, a song of mine called “The Truth Is.” I wrote it with a couple of good friends about what might have been the worst heartbreak of my life. We were just having fun, but somehow, we captured the emotional experience of the breakup better than I’ve been able to thus far. I’m still dealing with this particular breakup, so I’m still very connected to this one. Almost a year later it still hurts to sing and to listen to, which I think means it’s good.

Q: What can fans expect to see from Aaron Pollock in the upcoming months?

A: After “I Don’t Drink Whiskey Anymore,” I have a few other singles in the can. I started them before the pandemic and only recently have been able to get back to work on them. They all sound different from one another and from anything else I’ve released in the past, which I think is cool. One of them is even a collaboration with a hip-hop artist named Zachary Simon. He’s an unbelievable talent, and I could not be more excited to have gotten the chance to collaborate with him!

Q: Since March of this year, live performances have taken a hit. What have you been doing as an artist to get through these tough times?

A: I usually try to write as much as I possibly can, and that really didn’t change all that much when the pandemic hit. One silver lining of the past few months is that I’ve been able to connect with amazing artists/writers all over the place who I wouldn’t have had the opportunity to otherwise. Everybody’s off the road and looking to write, so this has been a very good time for writers.

A: I appreciate you more than you know. I put everything I have into my music, and the fact that it makes people feel something makes me indescribably happy. My favourite artists and songwriters changed my life with their beautiful music, and it would be the honour of my life to be able to do the same for somebody else.