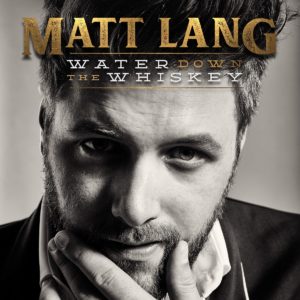 Top of The Country Winner” Matt Lang shares his experience with the CCMA’s, his latest album release, and more …

2019 has been an incredible year so far for singer-songwriter Matt Lang. Hailing from Maniwaki QC, Matt started playing music from a young age. He released his first English album in April of 2018. From there, it’s been an amazing journey into the Canadian Country Music Industry.

His first single “Love Me Some You” off his self entitled album “Matt Lang”, has reached over 2.5 million all time streams. Matt is currently under contract with Jayward Artist Group which is founded by power duo Tebey and Jill Snell.

Since its August 23rd release, Matt’s newest single “Water Down the Whiskey” is currently the most added song on Canadian country radio and has won him the SOCAN Musique Country Award.

Matt took home the title for SiriusXM’s “Top of Country” which is partnered with the Canadian Country Music Association.

He’s just come back from his first ever experience with the CCMA’s which took place on September 8, 2019 in Calgary. We had the chance to talk to Matt about the CCMA’s, his new single, his ongoing tour, and more.

HR: Matt thanks for joining us, what was it like to experience the CCMA’s for the first time?

Matt: It was such a fun and cool experience. It was my first time attending and I didn’t really know what to expect. It was an overwhelming weekend too because I flew in for the SiriusXM Top of the Country finale and then had to fly back to Montreal for my show at the Western Festival in St-Tite and then came back the next morning to Calgary for the CCMA Gala. I was very tired, but it was all worth it. I even got to introduce the Reklaws on the TV broadcast Sunday night, so that was pretty awesome! I got to meet a lot of great people – I’m already looking forward to next year!

HR: There were a lot of amazing artists there, who was your favourite? Did you have a “star struck” moment?

Matt: I would have to say Dean Brody. I knew who he was, obviously and I’ve been listening to his music for awhile now, but I was very happy to meet him in person.

HR: Your journey into the Canadian Country Music scene has been nothing short of incredible. Tell us what made you decide to cross over from French to English and why did you choose country as your genre?

Matt: Thank you! Well I’ve always listened to American country music. My grandfather introduced me to artists like Johnny Cash and I’ve always been inspired by old school country, but living in a French city, my first instinct has been to sing in French. I released a French folk album in 2015 right after I was a contestant on the French version of The Voice in Quebec but I realized that country music is what I should be performing. This is where I feel like myself and I think this is what I do best. My first English EP came out just a year ago, and everything kind of fell into place very quickly. Proof that it was the right decision to follow my heart.

HR: Your first album was such a fast hit for you, what can fans expect from your second album?

Matt: It really was! The next one will be a bit more country and a little bit more rock than my first EP. There is even a song that is more pop, Ed Sheeran style. I’m really excited and can’t wait to release more new music.

HR: March 2019 was a big step in your career when you signed with Jayward Artist Group, how did your relationship with Tebey and Jill come to be?

Matt: I met Tebey and his manager, Jill, through my producer Danick Dupelle. Danick also works with Tebey and played him my music and it all started from there. I am very lucky to be the first artist signed to Jayward Artist Group. Working with them has already taken my career to another level and opened doors for me outside of Quebec even though the new album isn’t out yet. It’s been great working with such a power team.

HR: Your new song “Water Down the Whiskey” is doing extremely well right now. What was the inspiration behind this track?

Matt: To me, this song is all about being real and straight forward. I drink my whiskey straight, and I like when things are simple. I think this is how it should be. What you see is what you get kind of thing. I’m very happy with the reception online and at country radio. It’s a great start.

HR: Out of the entire album, which track are you most excited about and why?

Matt: That’s a tough one. I really like them all, but I’m really excited about ‘’More’’. It is more of an old school country. I wish I could tell you more, but you’ll have to wait until the release 🙂

HR: You’re ending 2019 with a bang with over 20 shows lined up for the remaining months what has it been like touring across the country this year and what can your fans expect from you in 2020?

Matt: Touring is my favourite part of the job. I have so much fun with my band on the road and on stage, and seeing fans singing along to the songs is an incredible feeling. It’s been a big tour, a lot of dates all across the province. I’m a very lucky guy. We still have dates in Quebec in 2020, but we are also working on some shows in the rest of Canada. I can’t wait!

HR: Are there any country music artists or song-writers you’d love to work with in the near future?

Matt: I got to meet Dean Brody at the CCMA’s and I love his work. He seems like a super cool guy and I would love to write or collaborate with someone like him.

Matt’s second album is set to be released this fall. In the meantime, you can check out his upcoming tour dates at www.mattlangmusic.com.

Check out his latest track “Water Down The Whiskey” in the link below.

The year 2020 was life-changing. COVID-19 hit the world in a way no one could have imagined. Though some businesses were still able to operate throughout the pandemic, the music industry was one of the […]

Interview With “Nice Horse” Has a lot to celebrate. By Tammy Ann Chapman

Canadian Country band “Nice Horse” has a lot to celebrate. The ladies have a CCMA nomination, a top-40 single, and their summer hit “Cowgirl” that’s climbing the charts. The all-female band hailing from Alberta, Canada […]